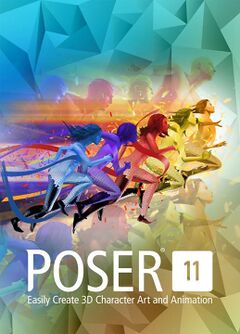 Cover of the latest version.

Poser is a 3D CGI program optimized for 3D modeling of human figures. The program has gained popularity because it allows beginners to produce basic animations and digital images, and the wide availability of third-party digital models.

Poser is a 3D processing software package for the posing, animation and 3D rendering of various human and animal figures. Similar to a virtual photography studio, Poser allows the user to load figures, accessories, lighting and cameras of fixed and animated representations.

Natively using a subset of the object Alias (OBJ) as a file format and a text-based markup for content files, Poser comes with a large library of pre-made human figures, animals, robots and cartoons. The package also includes poses, hairstyles, accessories, textures, hand gestures and facial expressions. As Poser itself does not allow the modeling of original objects, a large market in the artist community emerged, creating and selling content for Poser, which were made with third-party software such as ZBrush, Blender or Autodesk 3ds Max.

This software is available in English, Japanese, German and French (but not in Spanish) for both Microsoft Windows and Mac OS X. While the Poser interface has evolved since the introduction of the product in 1995, the current Poser 11 And Poser Pro 11 retain many of the interface elements of the application so that existing users can move to the latest version and navigate through the application without having to re-check the program.

How to alter sizes?

(This section is left for someone who knows about this program to edit it).

Retrieved from "https://giantess.miraheze.org/w/index.php?title=Poser&oldid=20876"
Categories:
Cookies help us deliver our services. By using our services, you agree to our use of cookies.