This is only a small sample of how obsessed Mr. Canosa is. In fact, in his channel there are many more videos of the same subject: giants. 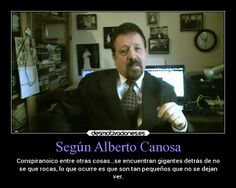 Even if it sounds like a joke, that's how Canosa thinks: "There are giants inside the rocks, but they are so small they do not let themselves be seen." 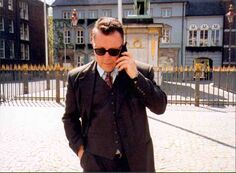 Alberto Canosa is a Spanish Charlatan and YouTuber Who was born in his homeplace in Spain and now lives in Germany. inspired by the TV series The X-Files that believes that there are giants inside the rocks (what rocks?) and that the Vatican is behind all the evils of this world.

Since he started on his blog, he has not stopped talking about the same thing (the giants inside the rocks, the Vatican, the Illuminati, among other cliché conspiracy theories), and his articles (and thus his videos) are full of Conspiracies and without a concordance in the order of the subjects (that is to say, in a moment it speaks of the illuminatis and soon it begins to speak of the giants inside the rocks, that is, it changes of subject quickly).

This person believes any conspiracy theory, usually the most popular conspiranoias (illuminatis, Masons, assassination of Kennedy, Vatican, Hollow Earth, etc.). Although he curiously does not believe in the Jewish conspiracy (very present among the groups of white supremacists and anti-Semitic).

He believes anything to the point of not wanting to thoroughly investigate a topic to see if what has been said is true, that is, he has blind faith in any conspiracy theory.

However, his 2 biggest obsessions are: the conspiracy of the Vatican and the giants inside the rocks.

The conspiracy of the Vatican

It is a simple idea: all the malicious conspiracies and evils in the world have been the work of the Vatican (but also the great events). For example:

Look at his videos or read the articles of this man and you will see that any topic relates to the Vatican.

Giants inside the rocks

According to him, in a very distant past, the aliens inhabited the planet Earth. These extraterrestrials were giants (of varying sizes, probably referring to the Nephilim) and their dead were enclosed in large rocks. Under this premise unconfirmed by the facts, the pseudo-investigator Canosa blindly believes that there are giants within any rock (or what he regards as a rock). For example:

Retrieved from "https://giantess.miraheze.org/w/index.php?title=Alberto_Canosa&oldid=34912"
Categories:
Cookies help us deliver our services. By using our services, you agree to our use of cookies.