Alice in Wonderland (ふしぎの国のアリス Fushigi no Kuni no Arisu) is an anime adaptation of the novel Alice's Adventures in Wonderland which ran on the Japanese network TV Osaka from March 26, 1983 to October 10, 1984. The series was a Japanese-German co-production between Nippon Animation and Apollo Films. The series consists of 52 episodes, however, only 26 made it to the US.

In the English language, this series is generally overshadowed by the success of Disney's 1951 feature film version of the story; however, the anime series was quite popular in various European countries, in Israel, in Latin America, in Iran, and in the Arabic-speaking world. The series was also dubbed into Hindi by the national film development board of India and telecast on Doordarshan in the early 1990s.

A young girl named Alice follows a White Rabbit into a hole, only to find herself in Wonderland, where she meets many interesting characters, including the mysterious Cheshire Cat and the terrible Queen of Hearts.

The beginning of the series adheres more closely to the original novel, whereas later episodes adapt the sequel to Alice's Adventures in Wonderland, Through the Looking-Glass, starting with episode 26.

One departure from the books is that Alice returns to the real world at the end of each episode, and goes back to Wonderland at the beginning of the next episode. These transitions between the two worlds are depicted as dream-like, and it usually takes Alice a moment to notice her surroundings have changed. 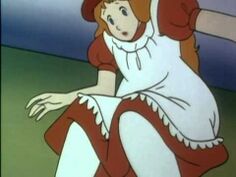 In this series, Alice is a girl with orange hair (unlike the blonde who has Disney) and wears a white-red dress (unlike the white-cyan who has Disney). Every time she travels to Wonderland, there are times when she must suffer an alteration in size. Mostly, she takes the role of absolute giantess (between mini to classic), on rare occasions she is para-giantess, and also on a few other occasions she is a shrunken woman (who gets to interact briefly with other women of normal size).

Retrieved from "https://giantess.miraheze.org/w/index.php?title=Alice_in_Wonderland_(1983)&oldid=34591"
Categories:
Cookies help us deliver our services. By using our services, you agree to our use of cookies.