Size difference between the lowest amazon (1.8 meters) and the highest (3 meters). It is used Wikyodai-chan and the Urban 1042 double cabin.

An amazon (also called amazoness[1], although this word is used rather to avoid confusion the common denomination of amazon), often also called as tall woman, is a woman larger than normal as far as nature can allow, that is, the laws of physics and biology allow their existence. The GTS community usually (not always) consider them between 1.8 meters up to 3 meters.

The word amazon comes from Greek mythology, which speaks of women from a purely matriarchal people who kept enmity with the Greeks. At the beginning of the Modern Age, the term happened to allude to the women warriors in general.

Amazon, for them, is a woman warrior, often stronger than normal and sometimes with remarkable musculature. It is not necessarily higher than normal.

Amazon, for them, is what was defined at the beginning of this article, that is, a tall woman:

Short answer: In most cases, Giantess Wiki not accept or tolerate them 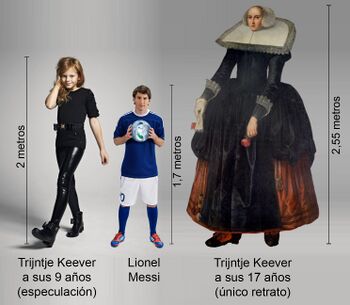 Trijntje Keever: the tallest woman in history. At 17 she measured more than all the men in Europe.

Giantess Wiki focuses more on giant women, that is, those who have a size that exceeds reality (ie, fictional). The tallest women in the history of humanity reached the 2.55 meters high, this means that Giantess Wiki will choose women larger than 2.55 meters.

However, there may be exceptions, either because of the relevance of the character (real or fictional) or because the context of her story warrants it.

If you want to discuss the case of some tall woman (amazoness) that deserves to be studied in Giantess Wiki, do it in the forum: [???]

Intervals of tolerable heights to be considered tall woman

The minimum and maximum heights according to age are:

**According to the average of a girl/adolescent/woman considered high.

***Following the average height of Trijntje Keever: the tallest woman in history.

When a woman is taller than allowed in the table, then that woman is considered a giantess.

Some tall women (amazonesses) who were accepted on this wiki

Amazons should not necessarily be muscular. The definition only requires that they have between 1.8 meters and 3 meters (approximately), so they can have any body shape (that is, they can be: very fat, very skinny, etc.).

Retrieved from "https://giantess.miraheze.org/w/index.php?title=Amazoness&oldid=32347"
Categories:
Cookies help us deliver our services. By using our services, you agree to our use of cookies.