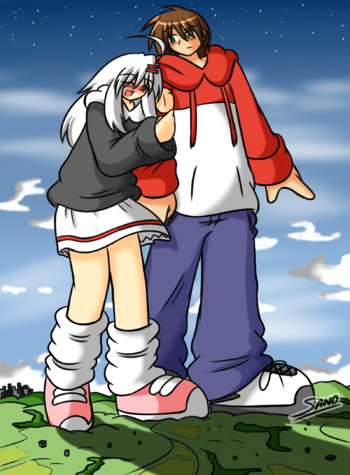 Example of couple. By Sanone.

Under the context of the GTS community, it is considered a couple (in Spanish: pareja) to 2 people of opposite sex of great size, that is, a giant and a giantess.

Within the GTS community, if the word "couple" is solitarily spoken, members of the community will assume that it is a pair of giants, they will rarely think of a normal couple or a relationship between a giantess and a normal man (or a para-giantess and a shrunken man).

To prevent confusion, it is recommended to add more information in the text or comment, ie avoid using the word "couple" without the extra information. For example:

Retrieved from "https://giantess.miraheze.org/w/index.php?title=Couple&oldid=20298"
Categories:
Cookies help us deliver our services. By using our services, you agree to our use of cookies.