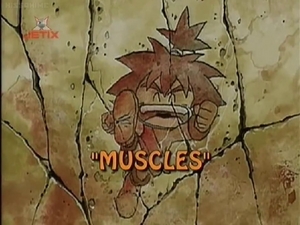 It consists of 3 children of the XXV century who must travel in time to rescue some small monsters called time-shifters and prevent history from being altered.

The time detectives, while at school, have to run several laps during the gymnastics class. All are tired except for Flint, who is the only one who has fun. The gymnastics class is interrupted because the presence of a timer was detected.

This chronomutant is called "Muscles" and is found in ancient Greece. His ability is to make a person strong by just touching them.

The heroes arrive in Greece in the fourth century BC, where they see a muscular man running. This man has an adult body, but a child's face. Flint decides to have a competition with him, remaining in a draw.

After being tired, the muscular Greek loses his musculature immediately, being left with a small, pueriel and emaciated body. The Greek calls Muscles, making the chronomutant present in front of the protagonists and showing that the Greek athlete is a cheat, especially because he wants to take advantage of his false muscles to win the Olympics. 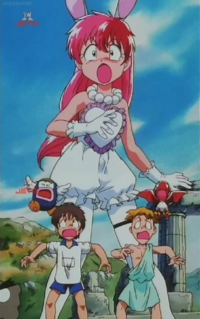 At least she is not naked.

Sarah Goodman proposes to men to train to gain muscle, so it makes them have a "heavy" training. During training, the Greek athlete is motivated to train for himself.

But Petrafina (the villain) manages to deceive the heroes by making Muscles come under her mind control. Petrafina orders Muscles to touch Flint, but she makes a mistake and touches Sarah, causing her to increase in size (but her clothes do not).

One of the heroes' allies helps him by giving him new clothes for his new big size ... with the shape of a Play Boy rabbit.

Petrafina, furiously, makes Muscle "transform" into a bigger and stronger version of himself.

Muscles attacks Flint and defeats him. Then he attacks Sarah, but unexpectedly she turned out to be more powerful than him. The fight continues, and Sarah does not show the slightest sign of difficulty in defeating him.

Muscles, being easily defeated, fleeing the place crying because he does not like to lose. Flint and the Greek athlete chase him to the Parthenon. Petrofina tries to sabotage the persecution, but the heroes do not give up.

Sarah gets upset with Petrafina, so she holds her ship and launches it like an Olympic disk.

Finally, Flint and the Greek atelta reach the Parthenon by themselves.

When returning to his time, the heores are punished by his gymnastics teacher (who is actually Petrafina), running 500 laps.

Retrieved from "https://giantess.miraheze.org/w/index.php?title=Flint_the_Time_Detective_-_EP21&oldid=19580"
Categories:
Cookies help us deliver our services. By using our services, you agree to our use of cookies.