Futurama is a cartoon series created by Matt Groening (creator of The Simpsons) that narrates the adventures of an inhabitant of the year 2000 (Fry) who traveled by mistake to the year 3000. 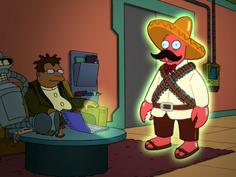 The episode begins with Hermes showing that the pet spits out large (very large) hairballs. He proposes that everyone must clean up, but then he gives Zoidberg full responsibility. Zoidberg does not respond, since his body is stiff. Everyone believes that he died, but suddenly he appears "naked" claiming to have moved shell.

Amy then receives a call to her cell phone (tiny in size) from a "stranger" whose sentences are not understood (these calls are daily, says Amy). This stranger turns out to be her boyfriend (Kif Kroker), who can not spin a sentence due to his great shyness. He tries to say "I love you".

Captain Zapp Brannigan offers help to Kif Kroker, the latter explains that he had fallen in love with the woman with whom he managed to escape from the spaceship that Captain Brannigan sent to a black hole.

Brannigan was ignoring Kif all the time, but then he realizes that Amy, Kif's girlfriend, meets Leela (whom Brannigan is in love with), so he devises a plan: make a double date of himself and Kif with Leela and Amy. Brannigan calls both women to the date. 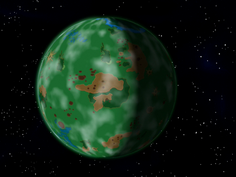 The planet of the Amazonians.

They meet at Le Palm D'Orbit, a restaurant in space orbit. Kif shows Brannigan the traditional way to please a woman (with flowers and chocolates), but Brannigan says that this is for fools and he is eating the chocolates. Hypocritically, Brannigan gives him the flowers he took from Kif to give them to Leela, but Leela burns them.

Kif tries to start a conversation with Amy, but he can not because of his shyness. He then decides to use Brannigan's phrase book to deal with women, but those phrases turn out to be obscene. Leela and Amy get upset and decide to retire. However, Brannigan advises Kif to sing in karaoke. Kif sings a romantic song and manages to get Amy's attention. However, Brannigan interrupts him so that he too can sing. But their songs turn out to be horrible for the general public. The song of Brannigan is so bad that all the crew of the ship flee from the place in escape ships of emergency. Brannigan, Kif, Leela and Amy were left alone in the ship, so Brannigan tries to handle it, but ends up being dragged by the gravity of the planet closest to it.

On Earth, Zoidberg is showing his possible new "attire" (shells), among them, one of Mexican stereotype (which offends Bender) and another of this type of homosexual.

Fry worries about Leela and Amy tries to call the restaurant where they are supposed to be, but the telephone operator confirms the restaurant had crashed on a planet. This prompts Fry and the others to rescue them.

Meanwhile, on the unknown planet, the "castaways" do not know where they are (because they lost the map), so they stay camping. Suddenly, they feel small tremors, so they hide whatever it is that is approaching.

They turn out to be women of great size (almost 3.5 meters), and they are looking for possible "invaders". Although the protagonists are hidden, Brannigan exposes himself and tries to seduce them. However, these women are dragging them.

On the other hand, Fry leads the ship (in an amateur way) to the unknown planet, with the aim of rescuing his friends. As soon as they arrive, they notice the rubble of the restaurant where they were. They also find giant female objects.

After searching, they manage to find their friends in the middle of a town of big women. They are supposedly hidden among the leaves, but they were actually under the skirt of a large woman, who hits them on the head.

Fry and Bender join the group of captured, but the women of the group (Leela and Amy) are released. The huge women confirm that they are in the planet Amazonia.

This planet has no men because they went extinct years ago. In this society, sports and comedy are more in keeping with the "feminine" taste. However, Fry, Brannigan and Bender laugh at all this.

The group is sent to the leader of the Amazons, but it turns out to be a computer. This computer appeared mysteriously when the men became extinct. The computer does not like men and asks for a time to think of some punishment for them.

The Amazons do not know what the men are for, but Amy confirms that they are sirevn to have sex, what the Amazons call Snu Snu (Kiki in Spain). Snu Snu is also a form of "punishment" that is applied to men, killing them until breaking bones.

The female computer finally decides the punishment: death by Snu Snu. Although Leela tries to convince her not to do it, the other Amazons emphasize that they made fun of women's basketball. Then, they release Bender because the robots do not have sex (supposedly).

Before initiating the punishment, Kif confesses his love to Amy. Then, the latter asks Bender to reprogram the computer to stop the Amazons. You can hear the cries of Fry and Brannigan, demonstrating more pleasure than suffering.

Bender manages to infiltrate the cave of the female computer, but discovers that it is actually a female robot who controls it and that she was the one who controlled the Amazons. This robot admits to being come from a planet governor by a male robot (and that bothered him).

Meanwhile, Leela can not wait for Bender anymore and decides to attack the Amazons, but she is easily defeated. On the other hand, Amy astutely decides to pose as an Amazon using stilts (the Amazons are so stupid that they do not realize the cheap trick).

Amy infiltrates the room of the blonde rider who was trying to have sex with Kif, so he and Amy run away from the place while the other Amazons pursue her.

Eventually, Amy manages to reach the female computer. The Amazons surround them and ask the computer what to do. The Ordendor asks them to release the prisons and bring a lot of gold. 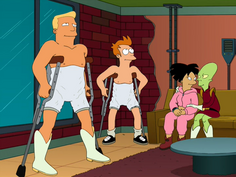 Already on Earth, Zoidberg gets a new shell: the same one he threw. Leela narrates that the "war of the sexes" was solved thanks to the fact that 2 robots of opposite sexes loved each other. Bender is happy for all the gold achieved. Kif and Amy are more united than ever. And finally, Brannigan and Fry are with their bones broken and at the same time happy for having performed Snu Snu.

Retrieved from "https://giantess.miraheze.org/w/index.php?title=Futurama_-_SE3-EP05&oldid=30674"
Categories:
Cookies help us deliver our services. By using our services, you agree to our use of cookies.