It is considered a galactic giantess to the woman whose size oscillates between the 1014 meters to the 1024 meters.

The adjective "galactic" is obviously that the range of sizes of these gigantas can be comparable to the galaxies (from the smallest to the largest).

This size allows them to "play" with UY Scuti (or similar in size) as if they were toy balls. The rest of the stars are insignificant.

Hera: The "creator" of the Milky Way 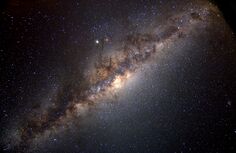 The Greeks at one time imagined that each star was a "tiny" drop of milk shed by a goddess named Hera. Today we know for sure the immense size of the stars, so if this myth were true, then Hera would be a galactic giantess. Photo of the Milky Way by NASA.

It is said that the Greek god Zeus, who was unfaithful to his wife, had a son named Heracles (Hercules, for the Romans) of his union with Alcmena. Upon learning, Hera caused Alcmena to carry Heracles in the womb for 10 months, and tried to get rid of him by sending two snakes to kill the baby when she was eight months old. However, Heracles could easily get rid of them by strangling them with their little hands. Heracles turned out to be Zeus's favorite. However, the Oracle said that Heracles would only be a hero, since it was mortal. In order to be an immortal god, he had to demonstrate a bravery worthy of a god.

Once the myth reaches this point, there are two different versions:

You could say that Hera was the galactic giantess who created the Milky Way.

Retrieved from "https://giantess.miraheze.org/w/index.php?title=Galactic_giantess&oldid=32360"
Categories:
Cookies help us deliver our services. By using our services, you agree to our use of cookies.