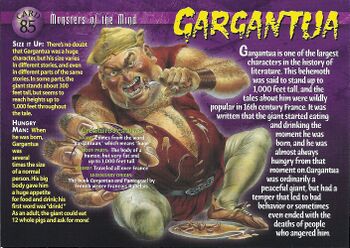 Gargantua: the most famous giant of literature. From this character are born the macabre allusions on the giants (devourers, destroyers, evil, powerful, etc.).

In the English language commonly refers to a large, human and male being. In Spanish it works the same, the word is gigante.

A common linguistically uneducated person will first think of a large male human. This is historically explained by Western literature in the 16th century, When François Rabelais published his masterpiece Gargantua and Pantagruel, where this work massively popularizes the idea that the giants are abominable, devouring, ruthless beings who use their enormous power and intimidating size to control the smaller than they.

In the case of giant males, most of the time there is repudiation for this idea, as it contradicts what the GTS community likes.

On the other hand, the giant women, often called giantesses or gigantas, have an inevitable appreciation because it is just what the GTS community likes.

Retrieved from "https://giantess.miraheze.org/w/index.php?title=Giant&oldid=20697"
Categories:
Cookies help us deliver our services. By using our services, you agree to our use of cookies.