"I can speak spanish proficiently, but I have a difficult time writing it. I didn't spend too much time living there before I moved to the United States."
―Herretik

Mexican illustrator resident in United States who draws for lucrative purposes, being well known within the Anglophone GTS community. He in his deviantART account describes himself as "another humble university artist".

In addition to being part of the GTS community, he also do "BE" (breast expansion) and "SW" (shrunken woman) drawings 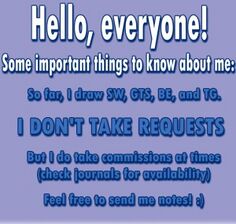 Image where Herretik explains his way of working in deviantART.

His artistic style, as his own account of deviantART indicates, focuses on digital art, using the animé style as a basis, and he also occasionally draws chibis.

Herretik has created a few OCs, which he has used in different comics and other media. It should be noted that not all of them are directed to the GTS community, since he is also related to other fetish communities.

"Considering that she's the one who started me here, she's my favorite too."
―Herretik

His main OC and his favorite. It was the first OC that created and uploaded on deviantART, so he is very fond of her to be the one who started it on the page. As a curious fact, she is also his deviantART avatar.

An OC created for the comic 5 Inch College Student. Although it was created as a character of small size (that is, an OC set to the SW community), she is often also drawn as giantess.

Character of the comic 5 Inch College Student. Despite not being a absolute giantess, due to the theme of the comic Dorothea is often drawn as a para-giantess, that is, interacting with small people even if she is in normal size.

Retrieved from "https://giantess.miraheze.org/w/index.php?title=Herretik&oldid=34813"
Categories:
Cookies help us deliver our services. By using our services, you agree to our use of cookies.