Jem and the Holograms

Jem and the Holograms is an American cartoon series created by Hasbro, Sunbow Productions and Marvel Productions.

The series revolves around Jerrica Benton, the owner and manager of Starlight Music and, as Jem, lead singer of the rock group Jem and the Holograms. Jerrica adopts the persona of Jem with the help of a holographic computer, known as Synergy, which was built by Jerrica's father to be "the ultimate audio-visual entertainment synthesizer" and is bequeathed to her after his death. Jerrica is able to command Synergy to project the hologram of Jem over herself by means of the remote micro-projectors in her earrings, thus disguising her features and clothing, enabling her to assume the Jem persona. Jem, through the use of her earrings, is also able to project holograms around her and uses this ability throughout the series to avoid danger and provide special effects for the performances of her group. 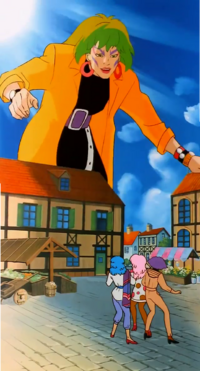 Retrieved from "https://giantess.miraheze.org/w/index.php?title=Jem_and_the_Holograms&oldid=35195"
Categories:
Cookies help us deliver our services. By using our services, you agree to our use of cookies.