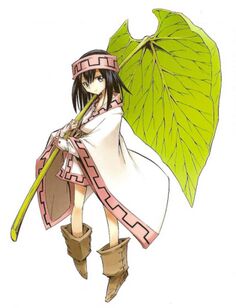 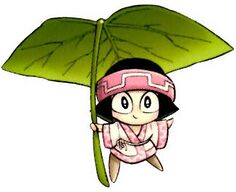 Shaman King's character. She is the companion spirit of Horo Horo.

What is a koropokkuru?

Koropokkuru means "small people under the leaves of the petasites" in the Ainu language. These beings are spirits that appear automatically in places where there are large areas of flora (petasites usually), so their origin is not of dead bodies (like the spirits of humans or animals), so there is no possibility of "make them rest in peace".

However, these beings can disappear if their habitat (large green areas) is destroyed. As the human population increases, the plants are destroyed (indiscrimed felling), hence, the koropokkuru gradually become extinct.

That is why Horo Horo wants to be the Shaman King to have his own field of plants and thus to protect the existence of the koropokkuru.

Kororo, in the past, was a human who lived in harmony with the koropokkuru. But as she also saw that these could be extinguished due to the destruction of the green areas, she decided to become koropokkuru to protect others koropokkuru.

Many years later, it became the companion spirit of Horo Horo, which has the same objective: save the koropokkuru.

Throughout the series, Kororo shows skills related to the cold (ice and snow).

In the anime, from episode 40, Horo Horo and his friends read the Magic Log (a manual written by Hao, 1000 years ago). After that, she acquires the knowledge necessary to turn Kororo into a giantess.

Her appearance changes abysmally, since it ceases to have her human appearance in Ainu dress and becomes something like a mecha:

Retrieved from "https://giantess.miraheze.org/w/index.php?title=Kororo&oldid=31374"
Categories:
Cookies help us deliver our services. By using our services, you agree to our use of cookies.