"Today's my debutt! Pleased to meet you all! You can call me Mount Lady!"
―Mount Lady (first episode of anime)

Secondary character of My Hero Academia. Her real name is Yuu Takeyama (岳山優).

Although her participation was very scarce within her work of origin (My Hero Academia), her popularity within the GTS community is very high.

My Hero Academia: Her work of origin

A.k.a Boku no Hero Academia (僕のヒーローアカデミア), is a manga written by Kōhei Horikoshi, based on a one-shot made by the same author and published in the fifth volume of manga Ōmagadoki Dōbutsuen under the name Boku no Hero. On January 11, 2015 was launched a VOMIC based on the manga. On November 2, 2015 began a manga spin-off called Boku no Hero Academy Smash! And written by Hirofumi Neda. An adaptation of the original manga to anime began airing on April 3, 2016.

80% of the world's population has developed superpowers. As a result, so many superheroes have emerged as supervillains. Izuku Midoriya is part of that 20% without any supernatural power. However, his greatest desire is to be able to study in the U.A. and become a hero as his idol All Might.

The low participation of Mount Lady

At least during the first season of the anime, only participated in 3 episodes that, totally, barely reached 2 minutes of participation. While she appears more in Season 2 and 3, she only participated for barely 4 minutes each season.

Her hero costume is composed of a purple and cream colored skintight bodysuit, that is accented with orange stripes. The bodysuit also has three peculiar orange diamond shaped dots on the purple top that are located under her chest. She also wears a purple domino mask with horn-like protrusions on the sides.

Mount Lady is a young woman who seems to enjoy the attention that being a hero that gives her and she doesn't feel any remorse from having to take that fame from another hero while basking in the glory. However, she is not careless, as shown that she won't transform into her giant form in confined spaces in fear of destroying nearby buildings and she's careful when fighting a villain who has taken hostages. She is also shown to be vain as she uses her sex appeal to further her popularity. Even though she is vain, she has shown to be selfless as she stopped Mr. Compress from reaching Izuku's group even though she was heavily injured. 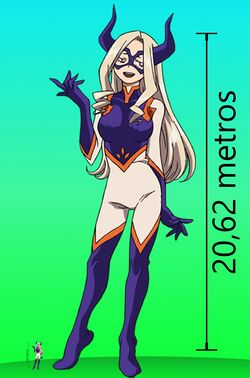 Impact on the GTS community

She passed without pain or glory as a heroic giantess of the group, because as a fictitious character she did not attract much attention. 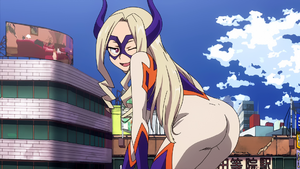 Calling attention with her butt.

A "good POV" (foot-POV) that highlights the foot.

Although she received relatively little character development and her participation was very little, she is well appreciated by the giantess fetishists for the following reasons:

Retrieved from "https://giantess.miraheze.org/w/index.php?title=Mount_Lady&oldid=34878"
Categories:
Cookies help us deliver our services. By using our services, you agree to our use of cookies.