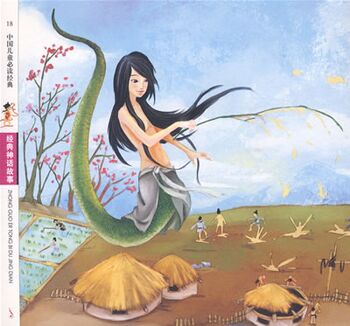 Faithful representation of the moment when Nü Wa invents a method to create humans quickly and massively. These humans created in the "made in china" will be the poor and miseruable fture.

Nü Wa has multiple forms, but the one that matters the most to us is the appearance when she created mankind. She is a giantess who is half human (upper half) and half snake/dragon (lower half). In other words, a naga. Her human aspect is mostly identified as Mongoloid (Common of that chinese period), that means she has black smooth hair, clear light yellow skin, slit eyes and prominent cheekbones.

Once the Universe was formed, completing with the sun, moon, earth, mountains, rivers, plants as well as the animals. The gods arrived on earth, whose only residents were the animals and a few monsters.

Nü Wa was introduced as a powerful goddess. Taking the form of a human only in her upper body, the lower half corresponding to a dragon (in some retellings, a snake), she was capable of controlling her form.

Nü Wa spent time transversing this world: Odd, beautiful yet so somber regarding life. She felt sad, lonely, eager for another sort of company, one with their own feelings and thoughts, like her.

Tired of hunting nothing, Nu Wa stopped by a river and retrieved clumps of mud. There, at the edge of a freshwater spring, she arranged it with a head, arms and legs so that it could move.

When she finished molding these figures, she loved the result and blew with might life into them, allowing the new beings to awake, move funny around her and calling her mama, dancing around her.

At start, she was worried about creating these beings herself. Later when she saw many were needed to populate the earth, she was determined to invent a way of breeding. Each time she dug mud, drops fell to the ground magically transformed into men and women instantly.

That small fact has been understood for millenniums by the first men, created by her hands, the most fortunate on earth, while the second, created more by chance were the more poor and miserable.

Retrieved from "https://giantess.miraheze.org/w/index.php?title=Nü_Wa&oldid=20835"
Categories:
Cookies help us deliver our services. By using our services, you agree to our use of cookies.