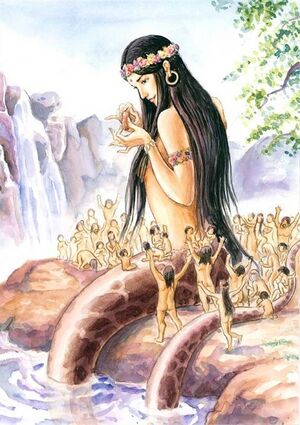 Nü Wa: the naga that created humanity according to Chinese mythology.

Naga, In Hindu mythology, it is a being with snake features.

The nagas are represented as women whose upper part (from the legs, in general) is anthropomorphic in appearance and whose lower part is a snake tail.

Many agree that Karbo was the one who popularized this idea, with his work Felarya and with his OC Crisis (a stereotypical silly blonde giantess with her bottom shaped like a snake).

Retrieved from "https://giantess.miraheze.org/w/index.php?title=Naga&oldid=19764"
Categories:
Cookies help us deliver our services. By using our services, you agree to our use of cookies.