She is a character of Savage Dragon.

The young woman named Rita Medermade would never have dreamed of just what her destiny would become. That is of the real life "50 Foot Woman", which she never could have seen coming. Rita was your hardworking and dedicated cadet with the Chicago Police Department and was sworn in July 19, 1989. She would move quickly up the ranks and served there for many years, becoming a respected member of the police department. However, sometime later in her career, a popular super would walk into her Precinct, and his name was the Savage Dragon. No Caption Provided 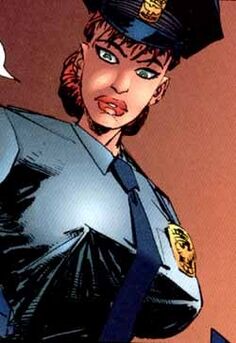 She first made her appearance by being present when Dragon came across Horridus locked away in her parent’s basement. She quickly became one of the more prominent officers on the Chicago Police Department, developing a friendship with Dragon.

Rita also became close friends with a detective named William Jonson, who secretly loved her. This attraction first came to light when the Dragon was possessed by one of the Wicked Worms and attacked his police colleagues. Rita Medermade was to be punched to death but William leaped into action, pushing Rita to safety.

This act of self-sacrifice was repeated during the Vicious Circle’s assault upon the police department where they were to murder CyberFace. MegaTech fired a shot that would have killed Rita but William intercepted, receiving the blast to his side. Their friendship grew even stronger although it never developed into a romantic relationship.

Rita Medermade eventually went on a few dates with Dragon but after they slept together, the insecurities of the policewoman prevented them from staying together. William Jonson was annoyed that he seemingly missed his chance but Dragon advised him to finally ask Rita out. The pair got together during the Martian invasion and remained together thereafter.

The release of Ralph Jonson from prison, where he served a sentence for killing his parents, terrified William Jonson as he had testified against his brother. Rita accompanied her boyfriend as they went out on the road, facing down numerous hitmen sent after them. The pair eventually returned to Chicago when Dragon returned to his hometown.

The threat of Jonson was finally resolved when he abducted Rita, taking her to the Lieberheim Embassy. William went to secure her release but was shot, revealing the Dragon had been within his body following his apparent death at Abner Cadaver’s hands. Ralph Jonson fled for his life, only to be incinerated by the incoming OverLord II.

After the Dragon was restored, Rita Medermade and William Jonson got married and had twin sons named Mark and Peter. They were conceived during the period when Dragon’s essence had been inside William’s body, causing some unspecified mutation. Rita was later carjacked and had her sons abducted by the Covenant of the Sword, at the behest of Damien DarkLord. Rita was left terrified of going outside until her children were later returned to her.

Attack of the 50 Foot Woman Some time later, in the reality that Dragon was sent to after confronting Damien DarkLord, Rita had been struck by a Martian enlarging ray that left her in a gigantic and near-mindless state. Dragon and the William Jonson Star managed to restore Rita to her original form. Although Dragon was taken from the pair, Rita and William stuck around in costumes and fought to defend the innocents.

After CyberFace’s defeat and the urban renewal of Chicago, a section of the city had been left in a devastated state. The Danger Zone was a lawless region and Star & Rita opted to remain behind to police it. The Rats attacked the couple and injured Star whilst also abducting Rita. The Liberty League carried out a search that ended when Rex Dexter tracked Rita using residual particles from the Martian weapon on Rita. His device triggered latent abilities in Rita, enabling her to grow in size at will.

Rita adopted the guise of Red Giant and continued to defend the Danger Zone alongside Star. They acted as heroes for some time until a confrontation with the Demon Dogs and Rats led to a mentally-unstable Red Giant growing too big and killing the vast majority of the villains. After Fire Lord and the Demon Dogs were defeated again at a later time, Red Giant decided to retire from fighting crime. Her and Star were then reunited with their twin sons from the parallel universe. The couple decided to retire from the dangers of battling villains in order to protect and raise their children but occasionally return to superhero action if it is required.

She is later seen attending Malcolm's 8th grade graduation. She also helps fight off the Tyrrus Combine during their attack on Earth. She also tries to stop Mako when he goes on a rampage, but is quickly beaten by him.

Retrieved from "https://giantess.miraheze.org/w/index.php?title=Red_Giant&oldid=28677"
Categories:
Cookies help us deliver our services. By using our services, you agree to our use of cookies.