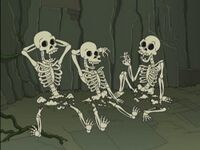 They did not survive, but at least they died happy.

The origin of this meme is the American animated series Futurama (in Futurama - SE3-EP05), when the protagonists arrive at a society totally matriarchal inhabited by robust women of 2.5 tom 3.5 meters (they fall within the definition of amazon and mini-giantess).

In that society, one of the punishments is Death by Snu Snu, which consists of a painful (and pleasurable) copulation with the heavy bodies of these women to the point where the "condemned" dies by spraying his pelvis.

However, the meme has different meanings inside and outside the GTS community:

It is associated with muscular women, strong, tribal and in a few occasions of great size. It is based more on the Amazon concept that exists outside the GTS community.

It is associated more with the size, specifically between the amazoness and mini-giantess. It is based more on the Amazoness concept that exists within the GTS community.

Retrieved from "https://giantess.miraheze.org/w/index.php?title=Snu_Snu&oldid=20927"
Categories:
Cookies help us deliver our services. By using our services, you agree to our use of cookies.