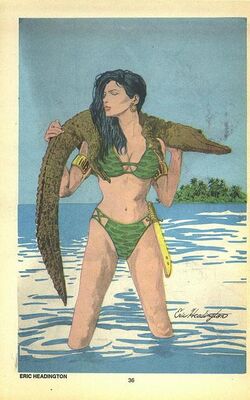 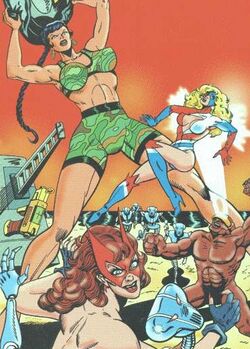 Tara Fremont is a member of the Superhero team Femforce. The jungle girl daughter of a wealthy industrialist, she was the only normal member until she ingested the same formula that transformed Dr. Carol Heisler into Garganta as a felicitous test for the adjustable bikini she was using. Her nicknames are Tara the jungle girl and Too Tall Tara.

Daughter of the most powerful and wealthy men in Florida, T.C. Fremont, the beautiful Tara Fremont is a heiress to one of the worlds most insidious industrial empires. Due to being raised in the protective arms of her social status, Tara would come to have the "blinders off" as she grew up seeing the environmental horrors her family's corporation would cause. Tara choose to devote her life to environmentalism, using her family's resources to ready her for a life of Activism beginning with her schooling in environmental sciences. From the Academy she was the idealist who organized rallies to protect the environment, having championed endangered species throughout the planet and in the process has adapted to life in various jungles and other locations far from civilization. Tara became an expert in both animal preservation and marine biology, graduating with degrees in Wildlife Management and Veterinary Medicine.

Tara used her families vast wealth to create her home-base is an artificial island, Jungle Island,which was created just off the coast of Florida. After years of construction so the island would be self sustaining and free of pollution as much as possible, Tara had herself and a few other naturalists move onto Jungle Island. Tara felt she had needed this island to create a sanctuary for specific endangered wildlife who she knew would disappear in a matter of a short time in the outside world. Due to her having Jungle Island created its renown as an expert site in animal preservation.

Tara was later mutated and gained the ability to increase her own height and strength to those of a giantess. She then returns to her natural height at will. She has demonstrated no abilities to shrink to smaller heights. In FemForce issue #100 Tara's powers were enhanced on a strange planet and she was able to grow to several hundred feet with very little effort. However a side effect was that after wards she was reduced to mere inches in height.

She has gained the typical physical body and fighting skills of protagonists of the jungle girl genre. Tara is in fact, quoting Bill Black: "...the most muscular of the FemForce because she is a normal being. The others like Stardust or Nightveil have powers that are not derived through weight lifting or any physical means so there is no need for them to have muscles..." (FF #21).

Tara is a remarkable athlete who has spent years training in acrobats and tumbling and keeps a rigorous regiment in training. She has also mastered armed combat and is quite proficient in the use of hunting knives and other forms of sharp weapons such as spears and other blades. Tara has also trained herself in the combat art of many martial arts, able to take on many opponents in unarmored combat. She had also gained the expert knowledge of tracking game of all kinds through the jungle forests, however her ability was diminished in urban settings.

In the area of smarts Tara gained several scholastic degrees after graduating from Florida State with degrees in Veterinary Medicine and Wildlife Management. She used her knowledge of jungle life behavior and its many diverse species to cultivate considerable expertise in the fields of nature conservation. She seems to also have a strange empathy to most creatures, beasts of tamed or wild natures are usually taken by Tara's presence.

Sometime later Tara gained the paranormal ability to enhance her size to enormous proportions at will after ingesting the Garganta formula. This allowed her to gain increased strength and invulnerability proportional to her size and density. Her maximum attainable height is presently unknown; however any height over fifty feet tall weakens her so rapidly that Tara could fall into a state of unconsciousness within a few minutes. Given some training and time she has been able to call upon her growth powers at will. Since Tara's powers differ from Garganta's in that she can only maintain her increased size for short periods of time but can grow much taller than Garganta.

Retrieved from "https://giantess.miraheze.org/w/index.php?title=Tara_Fremont&oldid=20852"
Categories:
Cookies help us deliver our services. By using our services, you agree to our use of cookies.