The GTS community also expresses their fantasies in artistic media (illustrations, stories, animations, video games, etc.), however, the most "valued" (and used) medium is that of static images (illustrations, photomontages, CGI art).

Every time an idea regarding the giantesses is presented, these ideas often have several patterns in common: they are usually represented by a giantess interacting with a city (for example, destroying it), sometimes holding with her hand someone relatively smaller than her. Ideas that are repeated over and over again, and occasionally show people fleeing from the giantess. All these ideas (or rather: patterns) used in artistic works are called tropes.

A trope is a device or convention for the presentation of ideas in artistic media, a shortcut to describe situations that the artist or author can reasonably assume that the audience (or target audience) will recognize. Tropes are the means by which an artistic work is exhibited by anyone who has an idea to show. We collect them, for the pleasure of having the information of artistic ideas in an orderly and structured way.

Tropes are not the same as clichés (the meaning is explained below). They may be new, but they seem common and known; They may be thousands of years old, but they seem fresh and new. They are not bad, they are not good; tropes are tools that the creator of a work of art uses to express his/her ideas to the audience. It is impossible to create an artistic work without tropes[2].

TV Tropes and All The Tropes are wikis that stores the tropes of artistic works, however, their purpose is general. For example, they have Attack of the 50-Foot Whatever (general trope for giants) and Incredible Shrinking Man (general trope for shrunken). However, being a general purpose, they don't delve into very particular tropes that occur in works that involve the size difference, and less in the subject of the giantesses.

Therefore, here, on Giantess Wiki, we can concentrate on collecting and cataloging tropes related to the giantesses (we name them "GTS Tropes"). Here is a list of GTS tropes, divided into groups (according to some characteristic).

And what is a cliché? 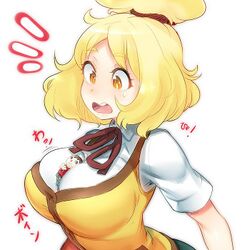 A person is lying on the tits of a giantess, how original!

A cliché is an element or idea that loses its effect due to its excessive use. This is subjective, since it depends on each person and each community of people.

Tropes are just tools. Artists and authors understand the tropes and use them to control the audience's expectations either by using them directly or by subverting them, to convey things and ideas to the audience quickly without saying them.

Human beings are natural pattern seekers and exhibitors of ideas. We use art to convey truths (or lies), examine ideas, speculate about the future and discuss the consequences. To do this, we must have a basis for our discussion, a new language that shows us what we are seeing today. Then our artists use tropes to let us know what things of reality we should put aside and what parts of fiction we should address.

When you investigate or meditate on tropes, remember these two mantras:

Tropes are not bad

There is one thing that you should keep in mind to keep your sanity here, and that is that including a trope in a particular job does not "ruin" or "make it worse." Not even overexploited and "hated" tropes like the foot-POV.

Boobcrush: a consequence (logical and obvious) of the enormous weight of a giant female breast.

If your favorite artistic works have long lists of tropes associated with them, well, so do all other artistic works. The demolition or boobcrush are not a bad thing: the first is practically inevitable (and general), and the second is a consequence (logical and obvious) of the enormous weight of a giant female breast.

Tropes are not good

We have already said that the tropes are not bad, but that does not mean that they are also good:

A GTS trope will not always work efficiently. In some cases, it only works with specific situations and in a range of sizes.

Therefore, we look at 3 parameters:

Retrieved from "https://giantess.miraheze.org/w/index.php?title=GTS_Tropes&oldid=31830"
Category:
Cookies help us deliver our services. By using our services, you agree to our use of cookies.