Graphic summary of the episode.

The heroine has arrived. 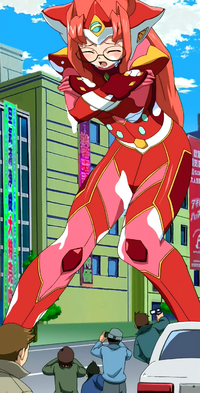 Does having glasses make it more "moe"? On the other hand, that white liquid looks dangerous.

What was expected of a magazine editor for geeks?

Indeed, that liquid was a kind of acid that destroys clothing (its energy source). 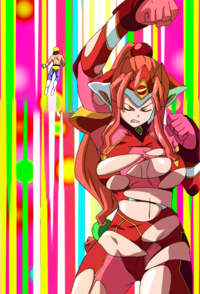 It is summer and the protagonists must get a part-time job. Moroboshi Tsubomi had gotten them a job at a cosplay cafe, where they should dress up as anime characters and deal with geeky-otakus.

In an unexpected moment, Ohtori Vivienne stumbles onto a paper and is hugged with Makoto, Koharuno Silk sees them and thinks that they keep a friendly relationship (or more than that).

Suddenly appears a giant monster which is...

...a magazine publisher for geeks.

While Ohtori Vivienne chases Koharuno Silk, UFO-Man intervenes and forces her to become Ultimate Girl (that is, against her will and unexpectedly).

The monster attacks by throwing some stickers, which are business cards of his moe "ideology": girls with big tits and glasses are the most attractive.

And as expected the monster attacks again, this time giving her a glasses, and as the heroine has the big chest, then the very moe. In addition also he throws to her a white liquid (acid).

This embarrasses the heroine, so she distracts and her opponent attacks her, throws her in the air and makes several Mexican wrestling keys.

Ohtori Vivienne looks at Koharuno Silk and sees the latter gives her encouragement. So she gets rid of the keys and performs a counterattack.

After several blows, the monster is transformed in the style of Knights of the Zodiac (Saint Seiya), obtaining an armor type Gundam.

The heroine decides to attack him with a final key, which is to hit his head against the ground and the weight of his own body.

These attacks makes him lose his mask and his identity is revealed, even if his face is not seen directly:

After defeating him, the heroine praises her opponent, considering it a good challenge.

She disappears and while everyone is looking for her, Makoto confesses to Koharuno Silk that the Ultimate Girl Busty is his favorite, so she is psychologically injured.

It is the largest commercial center in Tokyo, where the latest technology, video games, and anime are sold. For the geeks is a good place, since you get everything you want if you want to be updated (it is unlikely to sell you old stuff).

This episode is basically a praise to the otakus, since the fight is in that "holy place" against someone who works in a geek magazine.

Retrieved from "https://giantess.miraheze.org/w/index.php?title=Ultimate_Girls_-_EP05&oldid=20661"
Categories:
Cookies help us deliver our services. By using our services, you agree to our use of cookies.