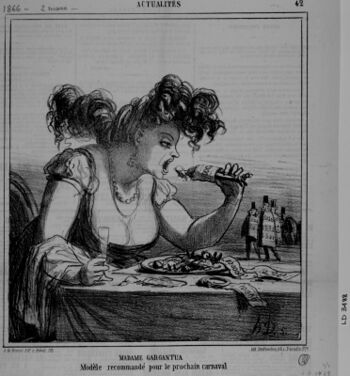 Today there are people who consider it exciting to see a giantess devouring people (for now it is unknown for sure why). This image shows Madame Gargantua eating people (the idea comes from the 16th century), but its objective was not to show it as something "pleasant" but as something "grotesque".

Vore is an English word that is the informal abbreviation of devour. It consists of animals (including humans, furries and pokémon) eating any object (mostly living beings).

It is simply the definition initially given, but the devourer is not a giant:

Several Internet users have confused these paraphilias, believing that macrophilia (or similar) is vore (or implies it), when in fact, it is not. To differentiate these terms, vore comes from the abbreviation devour, as was indicated at the beginning of this article and which is a sexual fantasy of being devoured (or devouring another), and macrophilia is a sexual fantasy of interacting with a giant(ess).

In the GTS community (only for fetishist users), both paraphilias are mixed very commonly, becoming confusing for newcomers to the community or unaware of it.

"Giants devouring people" according to the times

In the sixteenth century

In the West, it is traditionally considered that giants who devour people are grotesque, abominable, and abhorrent beings. In fact, this idea exploded all over Europe after the popularization of the work Gargantua and Pantagruel of the French writer François Rabelais.

This literary work tells the story of the grotesque and graceful adventures of Gargantua and Pantagruel (a pair of giants who do what they want because of their great power and strength). This work introduced into Western society the idea that giants are horrible beings and that devouring normal people is the worst thing they can do.

Note: This part was written to inform, not to promote a political ideology or to promote hatred.

Until that date, the idea was that it is abhorrent for a giant to devour smaller people. Therefore, this idea was taken to show the Jew devouring the people of Germany (ie: a Jew doing something abhorrent):

First we must clarify one thing about Hajime Isayama (author of this manga): he is not a voraphile or macrophile or related. Therefore, he has not been influenced by the ideas of affine communities such as the GTS community.

He drew giants devouring people for artistic reasons, using the traditional idea he inherited from François Rabelais: that a giant devour people is an abominable act.

Here the devouring plays an important role, however the ideas differ between the members who have non-fetishist reasons and the fetishists:

They are more connected to the real world and away from sexual prejudices (fetishism), and therefore, it is not surprising that they have inherited the ideas of François Rabelais (the oldest and most influential western writer specializing in giants).

They totally disagree with non-fetishists, and therefore, with the thinking of society. They consider nice the idea that a giant devours people.

Why do fetishists disagree with non-fetishists and society on this issue?

The truth is that nobody knows the reasons, however there are some who believe that Karbo was guilty of this, using the popularity of his work Felarya to popularize this strange taste (in addition to the taste for nagas, monster women and succubus). However, these people who accuse Karbo lack evidence.

That is why we simply keep the idea that we do not know how the vore became popular until proven otherwise.

Retrieved from "https://giantess.miraheze.org/w/index.php?title=Vore&oldid=35168"
Categories:
Cookies help us deliver our services. By using our services, you agree to our use of cookies.